We often get questions about the stone house located next door to Black Dog Salvage.

A reader of the Roanoke Times wrote in to ask about the house, so we thought it was a good time to post some of the information we have gathered over the years. (You can also read about it in The Roanoke Times here)

The house was purchased by Black Dog Properties, LLC in 2003 when Black Dog Salvage moved from its original location on Franklin Road (across from Reserve Avenue at the old Marsteller stone yard, now demolished).

When the property was purchased, the roof & exterior of the house were in very poor condition. With the help of our “in-house” contracting affiliate, Blue Ridge Residential, Inc., and assistance from the Roanoke City Department of Economic Development Facade Grant Program, the exterior was stabilized and is now waiting for appropriate reuse.

This stately home was built by Michael Grosso, a stone mason by trade, and his son Joseph. From what we can tell, it was built around 1911 in the upscale neighborhood of Mountain View at the foot of the old Woodrum Bridge. Thirty years later, Magic City Launderers and Cleaners was constructed next door (now Black Dog Salvage). 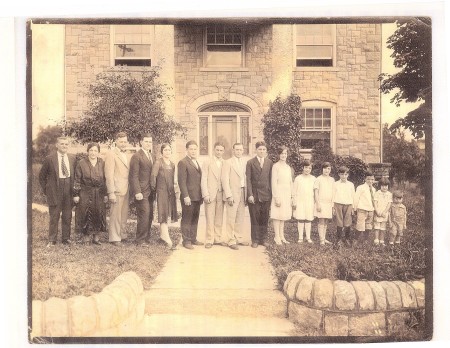 Michael Grosso was born near Rome, Italy and migrated to the United States around 1867. He moved to Rocky Mount, VA in the 1890s and eventually settled in Roanoke.

We have heard from a few sources that Mr. Grosso’s original desire was to move to Virginia Heights, one of the city’s first suburbs. Due to his ethnic descent, he was restricted from owning property there and instead built his home as close as possible, just across the bridge.

Michael Grosso’s stonework can be found throughout Roanoke, including the walls around the Hotel Roanoke, Jefferson Center (formerly Jefferson High School) and the Fishburn estate, now Mountain View Recreation Center.

Stone walls became popular in the early 1900s as a replacement for fences that had been torn down after the enactment of the city’s anti-cow ordinance. According to the Roanoke Times*, “The more affluent residents built bluestone walls to replace fences, particularly where a retaining wall was necessary. Some walls were built of cheaper stone, but “bluestone” was the most expensive and symbolically conferred a ‘status’ on the owner.”

We believe Mr. Grosso also carved the stone for the old downtown post office, constructed in the 1880s and demolished in the 1930s (pictured below). It is clear that his home was made of surplus stone from his many projects.  If you look closely at his house, the corners of the front porch match those on the post office.  Most striking are his carved stone gargoyles, shown reaching out around the turret. 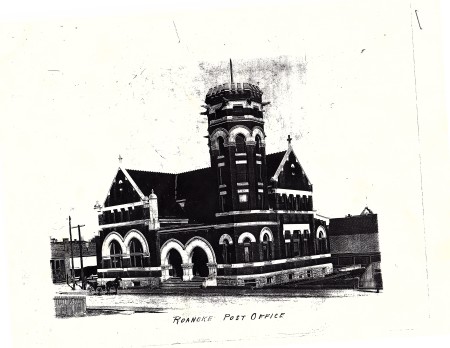 We unearthed a similar gargoyle a few years ago from Mr. Grosso’s backyard, which appears to have been a “second”, never making it to the post office. It is now resting outside of our front deck.

There are also other matching gargoyles, that were likely salvaged from the post office, located at a private driveway entrance near Roanoke Memorial Hospital.

We were fortunate to meet one of Mr. Grosso’s nieces, Sister Angie Driscoll (the youngest pictured on the right), who shared pictures and newspaper clippings about her uncle. She grew up across the street with her 13 siblings in a home that Mr. Grosso also built, which was later demolished when the Memorial Bridge was widened. Her mother, Lizzie Driscoll (Joe’s sister), is pictured second from the left.

Michael Grosso died at the age of 96 in the early 1940s and his son, Joseph, passed away a few years later.

The property is currently under renovation and will open in June 2018 as The Stone House at Black Dog Salvage, a guest house and special event venue.

If you have any more information about the stone house or the Grosso family, please let us know. We’d love to hear from you!

Michael Grosso: Stonemason of Early City
Michael Grosso and his son, Joseph Phillip Grosso, found plenty of work in Roanoke around the turn of the century, for both were accomplished masons. 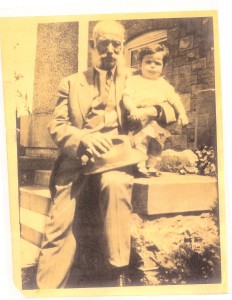 Around 1911 Michael Grosso and his son built the big, all-stone house on 13th St. S.W., opposite the eastern foot of the iron “Woodrum Bridge,” which connected the city with Roanoke Development Lands (now Virginia Heights) west of the river.

At this time there was only one all-stone house in Roanoke, built by William Welch back in the 1890’s on W. Campbell Ave., next to the original Calvary Baptist Church. This house was long the residence of Dr. Henry Vinson Grey, M.D.