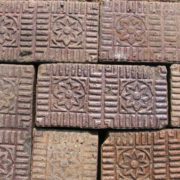 The 8-Point Flower / Star Brick pictured above was manufactured at the East Clayton Plant / Nelsonville Block Plant #3 and is the most commonly found design here in Roanoke, Virginia. Nelsonville sidewalk bricks are also prominent in Lexington, Virginia where they are found along the paths and walkways of Washington & Lee University and the Virginia Military Institute (VMI).

These bricks are distinctive for their purple-brown tint, a result of the clay used from around the Hocking coal region. The patterns served both a practical and decorative function. Since these bricks were used primarily for sidewalk, the raised patterns prevented water from pooling, thus providing a solid, non-slip service for the walk. They also provided traction for horses and rubber tires when used in streets.

The “salt glaze” process was taken from the pottery industry, where common salt is vaporized at high temperatures in the kiln. This strengthened the brick and made it water-tight. These bricks add character to landscape design in walkways and as decorative accents. They also make great door stops and book ends!