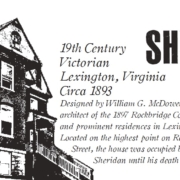 The team goes to Lexington, VA, to see what they can save from a fire-damaged house that had recently been converted to apartments. Mike and Robert work on removing a large door while Grayson and Tay work the perimeter of the house. The build doesn’t go as planned, however, forcing Mike to get creative with his problem-solving skills. Meanwhile, Robert and Mike get good news on an appraisal of a shuffleboard table they recently acquired in Greensboro, NC.

19th Century Victorian referred to as the “Sheridan House” in Lexington, Virginia.  Designed by William G. McDowell,  architect of the 1897 Rockbridge Courthouse, and prominent residences in Lexington.  Located on the highest point on Randolph Street, the house was occupied by John Sheridan until his death in 1929.  The home was later converted into apartments and suffered a devastating fire in February 2016.   The owners planned to demolish the home and asked us to help save its architectural history from the landfill.

Mike and Tay haul in an antique “laying out” table, aka Wake Table, for presenting dignitaries “lying in state”.  Estimated age 1860-1865.

Items available for sale from this episode

9/19/16: Per WDBJ7 The Lexington Architectural Review Board turned down the request to demolish the home based on its location in the Lexington Historic District.

6/20/17: Per WDBJ7  The Sheridan House is now available for sale and ready for restoration.