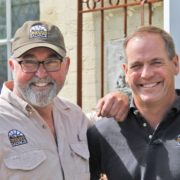 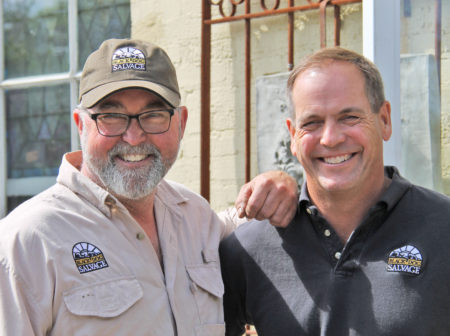 Robert Kulp and Mike Whiteside co-founded Black Dog Salvage, an architectural salvage company based in Roanoke, Va., 16 years ago. In 2012, their amazing work went public with the DIY Network series “Salvage Dawgs,” which has aired for six seasons and counting.

The show chronicles the unique situations that Kulp and Whiteside encounter during their daily work, which includes bidding on houses and buildings that are condemned to demolition so that they can extract any architectural elements or historical properties they consider to be of value from the premises. The reclaimed pieces are then reused or repurposed before being sold to assorted clients.

From old prisons to former hospitals to decommissioned navy ships, Kulp, Whiteside and their team — the ‘Dawgs’ — are always running into something they haven’t seen before. And there’s more to the business than money. With every salvage operation, they rescue extraordinary pieces that would otherwise be dumped into a landfill.

We recently had a chance to have a conversation with the “Salvage Dawgs.” Here’s what they had to say.

Q: You had owned Black Dog Salvage for more than a decade before “Salvage Dawgs” aired. So how did the show come about?

M: Well Robert and I had been approached by several people who wanted to do a similar show, but it never turned out well until a good fishing buddy of mine, Bill Hayes, who’s a reality TV documentarian, took our dare to pitch the show. He did a pilot, and here we are 85 episodes later.

M: The core of our business is recycling. We save stuff from going into the trash by either using it for its intended purpose or recreating it into something else, therefore capturing the energy that was initially spent to build that piece.

R: So the whole system is designed to stand between the demolition contractor and the landfill; we’re just trying to pick these carcasses clean before they reach their final destination.

Q: How did the two of you get involved in salvage efforts in general?

M: Robert and I have been in business 17 years now, and from day one we’ve been reusing stuff. But mankind’s been recycling since the beginning of history. A lot of stuff that we find in houses has been used and recycled from other houses.

R: For 16 years, we didn’t know what to call what we do. Then, things caught up with us and people put a brand on it — right now that brand is “upcycling.” But like Mike said, it’s been going on for all ages, because people recognize that they can save money and energy by utilizing something that’s already there.

Q: What is one of the most memorable pieces that you’ve saved as part of Salvage Dawgs?

M: I think one of the most landmark pieces we’ve found is a mock Eiffel Tower that we salvaged in Columbus two years ago. It’s now assembled on someone’s property here locally. When we first saw it I thought “oh my goodness, what are you going to do with that?”

R: My favorite is a terracotta façade that we took apart in Boardman, Ohio. It used to be on the front of a movie theater in Pittsburgh before it was taken to Boardman and put on the front of a modern building. The building’s new owner didn’t want it, so we took the Dawgs up there and disassembled it. We later sold it to a customer from Florida.

Q: How much specialized knowledge is required in this line of work?

M: Probably the most important part of it is to understand what you’re saving. If you’re just pulling up flooring then it’s kind of a no-brainer, but if you’re taking apart something that has to go back up the same way, it takes some skill.

R: Having a background in the construction industry is helpful, just simply because if you know how it goes together, you’ve got a head start on how it comes apart. Now, unfortunately, some things were built not to come apart.

Q: Do you both have a background in the construction industry, then?

R: I have a degree in building and construction from Virginia Tech University.

M: My background is in the marine business; I was a yacht captain for 15 years, and that taught me how to build and work on certain things. Between Robert’s understanding of construction and my “we’re-going-to-get-it-done” attitude, we’re a good couple — an odd couple — but a good couple (laughs).

Q: Is there anything surprising or weird you’ve found that stands out?

R: We’ve run into some bizarre things, like when Mike and I were taking a house apart in the middle of North Carolina and just happened upon some mid-late 1800s glass negatives from a doctor’s collection of medical photos. They were certainly popular. The stranger the object, the more people love it.

Q: Do you see this work expanding throughout the country?

R: It looks like we will probably be traveling farther in upcoming seasons than we have in the past.

This story was originally published in The Columbus Dispatch’s 2016 Fall Home and Garden Show special section.