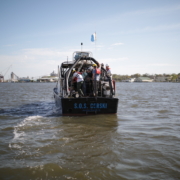 In last Sunday’s episode, we saw Mike and Robert head down to Amelia Island, Florida, and get lessons in diving and safety so they can salvage under water. They recover old ship parts from the bottom of the ocean and, with the help of Grayson and Tay in the shop, transformed them into an upcycled floor lamp.

The Crew was able to salvage and pick some fantastic nautical items. Among the items featured on the episode were the YP 693 Bulwark Panel, the ESI 5-ton pulley blocks, the sailboat transom, the assorted turnbuckles, and MUCH more!

Every Sunday, following the premiere of each episode, join us on Facebook where we’ll go LIVE! We’ll relive memories from the job, answer your questions, and share stories about things you didn’t see!

Watch Tay and Grayson on Facebook LIVE after the episode premiered!

recorded after this episode premiered