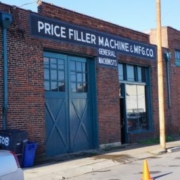 In last Sunday’s episode, the Crew performed a salvage here at home in our beloved Roanoke, VA, at the Price Filler Machine Shop. The shop opened in the 1920s in downtown Roanoke, and they built and repaired machinery and other metal parts. Tay is still plugging away cleaning out the shop (it’s a big job considering he is clearing some things like this one-ton lathe), and eventually, the Dawgs are hoping to convert it into a maker’s space!

They also did a little pickin’ with their ol’ pal, Jack, and we all know that means for some crazy stories and crazy finds…like the double-sided train platform bench from Columbus Union Railroad Station, the North & Western railway speeder car, and MUCH more!

On Mondays at 12:30pm (ET), following the premiere of each episode, join us on Facebook where we’ll go LIVE! We’ll relive memories from the job, answer your questions, and share stories about things you didn’t see!

Watch Tay and Grayson (Joined by Mike & Robert) on Facebook LIVE from the Stone House!

recorded after this episode premiered