A New “Black” Dog   Back in January of this year, my dad and I were discussing the prospect of getting a new black dog as Sally, the Chief Operating Dog of Black Dog Salvage, was getting on in years and starting to look toward retirement. We’ve always had a positive relationship with the Roanoke Valley SPCA and I went straight to them to see if they could help us find an heir to the throne, so to speak. I also had reached a point in my life where I just really wanted to find a dog who could by my daily companion at work and at home. [caption id="attachment_13455" align="alignleft" width="250"] 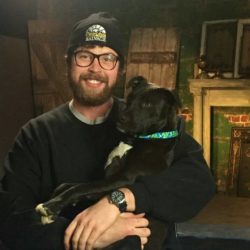 Tay Whiteside & the other “Black” Dog- Stella[/caption] A few weeks went by before I got a call from the RVSPCA, I was elated. They informed me that they had an eight week old black lab female puppy and they wanted me to come take a look. I show up, walk back to the play area and they brought her out. They told me her name was Arianna, which I knew I had to change, but it didn’t matter when I saw this ball of adorable energy start running toward me. Overcome with emotion, this dog ran right to me, which the lady working there at the time said had never happened to anyone with this dog. It’s safe to say it was love at first sight. It was apparent, however, that she was not a lab, nor was she black. None of this mattered to me, I knew I had to at least take her on the two week foster program. 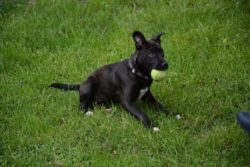 The reaction she got from everyone I introduced her to at Black Dog Salvage was overwhelming for the both of us, except that I didn’t pee on the floor. It was a bit tough at home because I had never been solely responsible for house training a dog but after a week I could already tell how smart this dog was. The end of the two week foster program was approaching fast and I had to make a decision, do I keep her or not? I will admit, I had a moment where I didn’t think I’d be able to handle a young pup. But at some point, I just looked over at her and she looked at me and I knew right then and there that this dog and I were going to be together for a long time. My mom is actually the one who came up with the name Stella for our new black dog, and it just fit, (She kind of has a knack for that).Stella continues to make myself and everyone she meets grin ear to ear and fall in love just like I did the day I first met her. I am constantly amazed at how smart she is and just the level of emotion she expresses. Her facial expressions can literally be extrapolated into paragraphs about what she’s thinking and I find myself wondering what’s going on in that adorable head of hers, I think, probably just dog stuff. #stellaknows]]>