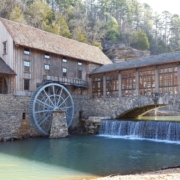 Millstones from the Bent Mountain Mill have found a new home at the Dogwood Canyon Mill located in Lampe, MO. These millstones were salvaged by the Black Dog Salvage crew in Season 1 of the DIY Network show Salvage Dawgs. (You can watch Season 1 of Salvage Dawgs on Netflix) 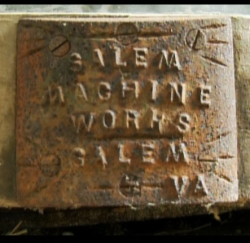 These days, millstones are most commonly used for decorative landscaping features or fountains.

“Mike has a great imagination…he sees the possibilities others don’t, but his one fallback is – let’s make it a table” Robert Kulp 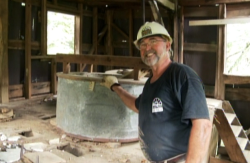 “This is a coffee table” Mike Whiteside

This is the first mill the team had ever salvaged and they took care to disassemble it because we didn’t know if it would be sold as a whole or in parts. The bedstones and runner were the original millstones. The structure had been built around them. Each stone weighed about 1500 lbs and was made of granite. The second set of millstones were smaller and had been added at a later date; most likely moved from another mill, (they had different markings). 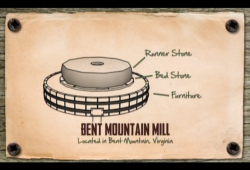 Mike had started to make a table out of the shroud from the larger set of millstones when Robert was able to locate a millstone specialist, known as a Millwright and asked him to stop by. Ben Hassett stopped in to take a look at what we had at Black Dog. He was able to convince the guys that the value comes in having matched stones and all the pieces of the running gears stay together. Lucky for the new owners, Mike and Robert have a deep respect for history.

Ben Hassett assisted with the transportation and set up of the mill stones in their new home, Dogwood Canyon Mill. The goal of the Dogwood Canyon Mill is two-fold, first and foremost it is a working museum dedicated to the Ozark watermill, secondly, it is an operational mill, grinding yellow corn into meal and grits. More info about the mill can be found here 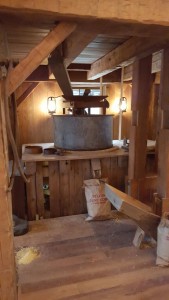